Big Tracy gets around 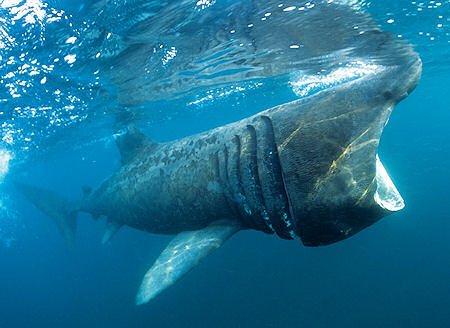 That British waters are home to the world’s second-biggest sharks is not news, but the basking sharks off our coasts have recently given up a big secret, says Hannah Cleaver

BASKING SHARKS ARE LONG-DISTANCE TRAVELLERS. They cross the Atlantic, according to new research, and those who discovered this fact hope that the additional attention to the threatened plankton-eating giants can be used to improve international attempts to protect them.
The researchers are calling on divers to abide by a code of conduct and take identifying pictures where possible, to send to monitoring projects.
Mauvis Gore from Marine Conservation International and Jackie Hall of Manx Basking Shark Watch managed to tag two basking sharks and track them.
They gathered data showing that one 8m female travelled more than 5900 miles, and made numerous deep dives, reaching a record 1264m in the Atlantic.
Working with Fiona Gell, Wildlife and Conservation Officer for the Isle of Man Government, and David Rowat from the Marine Conservation Society Seychelles, they tracked the female basking shark, which they named Tracy the Tower Insurance Shark after a local sponsor, for 81 days, until the ?3000 satellite tag popped off – near the Newfoundland coast.

THEIR RESULTS, PUBLISHED in the current edition of the journal Biology Letters, indicate that the plankton-eating giants both sides of the pond form one population rather than distinct ones.
This backs up research that showed low genetic diversity between basking sharks in different continents.
It should also prompt conservationists to co-ordinate protection schemes internationally.
Jackie Hall says they were delighted to have been able to contribute to the research on basking sharks, and said
that their group, with its website, had helped to raise the profile of the endangered animals.
‘We wanted to inform the public, and raise awareness of basking sharks in British waters,’ she says. ‘Scientists estimate that the world population is only about 8200 individuals, and they are rightly strictly protected by the law.
‘They were included on the Bonn Convention on Migratory Species
in 2005, which resulted in a recommendation against fishing for them in the north Atlantic.
‘They are very slow-breeding, which makes the population vulnerable. They have live births, and five or six young at a time, each one measuring about 1.5m long. Only a little is known about this, but it is thought that they gestate for between 18 months and three years.
‘In the entire history of human observation of basking sharks, only one live birth has been witnessed and recorded. A fisherman caught a pregnant one, and let it go, only to see the spontaneous birth of six babies.’
The plankton-eaters have been under attack by people for hundreds of years, their livers boiled down for the oil they contain. Today they are targeted for their huge dorsal fins, which can reach 2m high and are prized by restaurant-owners in China, who display them to promote their shark fin soup.
‘The dreadful irony of this is that
I have been told that basking shark fins make terrible soup,’ says Jackie Hall.
The other big dangers facing basking sharks come from people intent on seeing and enjoying them – and this often means divers. ‘Our success in raising awareness of, and enthusiasm for, the basking sharks has had the unfortunate effect that more people want to get up close to them, and this is increasing the danger of them being disturbed,’ says Jackie.
‘You can see on our website that people are logging sightings practically by the hour at times.
‘On the one hand this is helpful, but on the other, we do worry about the sharks being disturbed.’
Jackie Hall has been diving since the early 1980s, and is a great basking shark enthusiast, but she has never been in the water with one, out of principle.
‘We don’t encourage people to dive with basking sharks. The best way to see them is from a boat, or if you really have to get into the water with them, by snorkelling. ‘The big dangers posed to basking sharks by divers are propeller damage from the boats, and disturbance by people getting too close or acting inappropriately and splashing around.
‘It’s illegal to disturb basking sharks. They are very strongly protected, and it is not good enough to be unaware of this – disturbing them, changing their behaviour, is against the law.
‘A code of conduct has been drawn up by the Shark Trust, and this should be observed at all times.’
The basking sharks are often spotted at the surface, where they find the warmest waters and thus the zooplankton on which they feed.
This puts them at danger from boat propellers, and Jackie has many photographs of basking sharks that have been injured in this way.
The sharks also indulge in what researchers consider courtship at the surface. Basking sharks swimming in pairs, either parallel or one behind the other, and spectacularly breaching the surface, may be a huge draw for human observers, but should be taken as signs to leave the area.
Three people drowned in 1937 off Carradale in Scotland when a breaching basking shark smashed their boat. The incident shows the real danger the big animals can present to people,
says Jackie.
‘If you have sharks breaching in the area, just get out of there, don’t get in the water, take your boat away.
‘Divers should never get close either. These are huge, powerful creatures and their tails could really hurt or even kill someone. The very last thing we want is a human fatality. Basking sharks are endangered as it is – they really don’t need that kind of press.
‘We’re very keen to raise awareness among divers. It’s crucial to get people to observe the Shark Trust basking shark code of conduct at all times.
‘We also call on those in charge of boats to do the one-day training with WiSe, and for anyone near big marine animals to make sure that they only use boats piloted by WiSe-trained people.’
Jackie also appeals for anyone who sees basking sharks to keep a record
of what they see and where and, if possible to do safely, to photograph their dorsal fins or other potentially identifying features.
This information should be sent to the Basking Shark Project at www.basking sharks.org.
Information on sightings should be sent to the Marine Conservation Society’s Basking Shark Watch or, if you’re in Isle of Man waters, to the Manx Basking Shark Watch (see panel below).
IN THE WATER WITH BASKERS
ADVICE FROM THE SHARK TRUST
Do not attempt to touch the sharks
8Keep at least 4m away from each shark, and beware of the tail
Restrict the number of people in the water at any one time to four
Groups should stay together, preferably at the surface
8Take lots of pictures but avoid using a flash, which could scare the sharks.
8 Photograph any distinctive features including fins, which could be used to identify individuals.
8 Do not use underwater propelled devices
* Basking Shark Project, www.basking sharks.org
* Marine Conservation Society (UK), www.mcsuk.org/marineworld/basking sharks
* Manx basking Shark Watch, www.manxbaskingsharkwatch.com
* A list of WiSe trained operators can be found at www.wisescheme.org

Tagging was done from Bob Taylor’s boat Gemini, out of Port St Mary, with help from Mal Kelly whose boat Foillan Beg runs out of Peel.